If you have never been to Osaka, the Osaka Castle (大阪城 – Osakajo) is definitely one of the spots you need to visit. Built in 1583, the Osaka Castle has been the center of many historical events, from its birth to the end of the Tokugawa Shogunate, and today it is a hot spot for cultural events in the city of Osaka.

History of the Osaka Castle

The Castle of Osaka, was built in 1583 by Toyotomi Hideyoshi (2 February 1536 – 18 September 1598), the second “Great Unifier” of Japan who, together with Oda Nobunaga (his predecessor) and Tokugawa Ieyasu, brought to an end Japan’s Warring States period (戦国時代 – Sengoku Jidai). Toyotomi’s castle was modeled after Oda Nobunaga’s headquarters, the Azuchi Castle, but he planned to surpass it in all possible ways. After its completion, in 1597, and the death of Toyotomi Hideyoshi in 1598, the castle was inherited by his son, Toyotomi Hideyori, until the 4th of June 1615, when the Tokugawa forces sieged and siezed the castle, bringing the Toyotomi clan, and its power, to an abrupt end.

The Osaka Castle and its Museum

Situated in an area of approximately one squared kilometer, the main tower of the Osaka Castle is built on two platforms of cut rocks, using the Burdock piling technique, a classic Japanese building technique that is at the base of most of its classical castles. The central part of the building is five stories high on the outside, and eight stories high on the inside. The castle grounds span about 60.000 square meters, housing 13 buildings in total: 2 gates (Otemon and Sakuramon), 5 turrets (Ichiban-yagura, Inui-yagura, Rokuban, Sengan, Tamon), a well (Kinmeisui), a storehouse (Kinzo), a gunpowder magazine (Enshogura) and three sections of the castle wall (all located around the Otemon gate).

The Osaka Castle Museum, open every day from 9:00 AM to 5:00 PM offers a wide range of artifacts (from the Azuchi-Momoyama period in particular), dioramas and videos to learn the history of the castle as well the access to the highest floor, with its beautiful panoramic view and the possibility to have your picture taken while wearing a traditional helmet, surcoat or kosode kimono.

Location and surroundings of the Osaka Castle

The Caste of Osaka is located in the center of the city, and is easily accessible by both, JR West Osaka Loop Line at the Osakajokoen station (literally the Osaka Castle Park stop) and through the regular subway at the Tanimachi yonchome station (on the green Chuo line) and at the Morinomiya station (on both the Chuo line and the JR Loop Line).

Also, right before the entrance to the Osaka Castle Park, arriving from the Tanimachi yonchome station, is the NHK Osaka Hall and the Osaka Museum of History, another great suggestion for tourists curious to find out more about Japanese History. 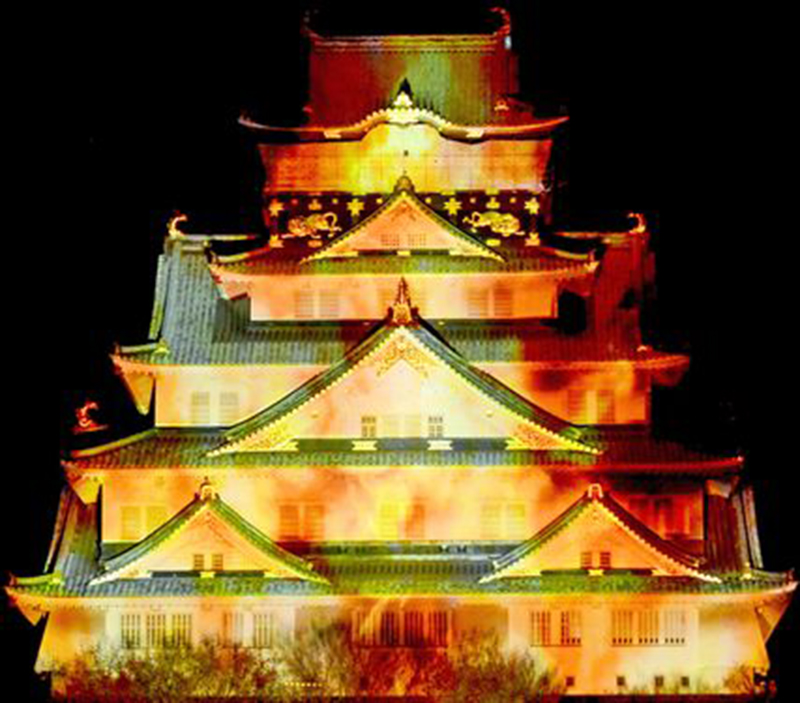 Festivals and Events at the Osaka Castle

Given the vastness of the area of the Osaka Castle Grounds, the Park houses several events throughout the year, such as the Ikutama Summer Festival, one of Osaka’s most important events, dedicated to the Ikutama Shrine. The Osaka Castle is also a favorite location for 3D Mappings and Illumination events, and a popular destination for the Hanami during the Cherry blossom period in spring and the Plum Blossom period in winter.

In conclusion, the Osaka Castle and its surrounding park is definitely a tourist location everyone should visit when in Japan, as it is an historic and sightseeing landmark of Japan, so rooted in the Japanese tradition it has helped to shape the modern imagery of Feudal Japan.

Other Articles About Osaka

Why Should I Go to the Osaka Kaiyukan Aquarium?

The Museum of Instant Ramen in Osaka