Let’s face it – whatever dietary requirements you may have, they already make you think outside the box more than the common omnivore. But it’s also very likely that at home you enjoy plenty of little daily luxuries, such as grocery shops that stock things you can eat or menus that highlight dishes just for you. While those things may not disappear completely when you go to Japan, they are likely to be challenging, even more so if you don’t understand Japanese and can’t explain your diet properly. But don’t panic, you don’t have to stick to Western food and miss out on delicious Japanese dishes. Just do a little bit of research before you go – and this article will help by summing up some of the most important things to keep in mind. It will also recommend some tasty options to try instead. It’s not a complete guide, just a starting point, but it’ll help you find all kinds of Japanese food that you can eat. 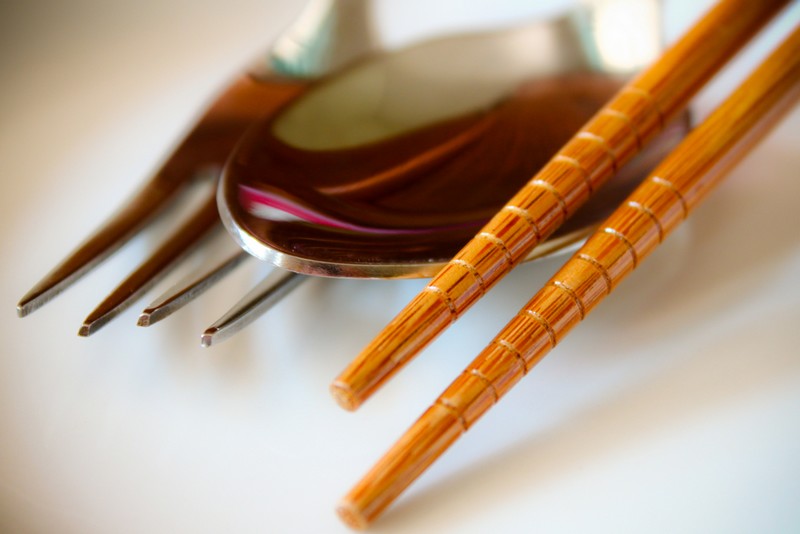 Given that the most famous Japanese dish is sushi, pescatarians are the least likely to experience difficulties in finding things to eat, right after omnivores. However, be prepared that sometimes it may be necessary to explain what do you mean by “meat” – it can happen that you meet people who don’t consider chicken a meat, for example. When eating out, look out for the following words and their corresponding kanji in the menus: chikin (チキン), tori (とり/鳥), niku (にく/肉), buta (ぶた/豚) and gyū (ぎゅう/牛). If you’re not sure, ask if the dish contains any meat. Be sure to ask that when ordering soup as well – for example most ramen dishes are made using pork stock. Besides this you may want to avoid gyōza (ぎょうざ/餃子), unless they are vegetable ones, and sukiyaki (すきやき/すき焼き), which uses beef. Everything else: sushi, sashimi, tempura, takoyaki, unadon or tendon, and so, so much more is there for you to try and enjoy!

Things get a little more complicated for vegetarians, because the majority of Japanese do not consider fish to be meat, and many dishes use dashi, a dried fish stock. Asking and checking everywhere if things contain dashi will only give you a headache and your host/waiter/chef – a panic attack since dashi is almost everywhere. You’ll enjoy the trip more and get to try more Japanese cuisine if you are prepared to forgo the strictest vegetarianism and try things even if they may contain a little bit of fish stock. If you can do that, you open yourself to a whole world of fantastic cuisine with far less worry about what you will eat. On top of the meat vocabulary listed above, look out for the word sakana (さかな/魚) and any kanji that will contain a squished version of the fish character in names of dishes or ingredients, and you’ll avoid most things that you can’t eat; similarly look out for the word gyokairui (魚介類) or the westernised shīfūdo (シーフード), which mean seafood. Instead search for dishes that include tofu (とうふ/豆腐) or vegetables, yasai (やさい/野菜); try noodle dishes like udon (うどん) or soba (そば); get a kappa maki (かっぱ巻き) if out in a sushi place; grab some onigiri (おにぎり) in a convenience store which doesn’t have any of the listed characters in its ingredients list (the umeboshi onigiri, a pickled plum one, likely being the most common); or try a vegetarian  omuraisu (オムライス), rice in an omelette, if you’re feeling a homesick for slightly more familiar tastes. While you can try temple food, which is 100% vegetarian, it’s considered a rather royal treat. There are plenty of options for smaller budgets, even in the non-vegetarian restaurants, so don’t shy away from them.

Vegans are even less common in Japan than vegetarians – and thus can create an even greater confusion and panic in restaurants, hotels etc. – but the advice for vegetarians will cover a great deal. You simply have to eliminate foods that may contain milk or eggs, gyūnyū (牛乳) and tamago (たまご/卵/玉子) respectively, as those are probably the most common ingredients in Japanese cuisine left for you to avoid. Anything with tamagoyaki (卵焼き/玉子焼き) and any form of chawanmushi (茶碗蒸し) is out of the question, and you may want to avoid tempura, okonomiyaki and takoyaki, as they are likely to contain eggs. But there should be nothing stopping you from enjoying plenty of tofu dishes, like inari-zushi (稲荷寿司); basic soba noodles (ask to make sure, as different kinds may contain some non-vegan toppings); sekihan (赤飯), the red rice; vegan onigiri or vegetable skewers in yakiniku grill restaurants. See, you can find something for yourself even in places for meat-eaters!

Japanese Food for the Lactose Intolerant

Fortunately for the lactose intolerant, what you may be unable to eat in Japan doesn’t differ much from the foods at home: yoghurts, ice-cream, cheese, milk etc, most of which are not common in traditional Japanese cuisine. Ask when in doubt, but in most cases, unless it is specifically listed (for example, in a cheese ramen), it will likely not contain it. The biggest difference is that you may find less lactose intolerant friendly replacements, especially for yoghurts, ice-cream and cheese; soy milk is largely available, including flavoured. For the duration of your stay I recommend that you try some Japanese desserts instead, such as mochi (もち/餅), manjū (まんじゅう/饅頭) or o-dango (おだんご/お団子), all of which come in a variety of flavours, including the most Japanese ones like matcha green tea or sakura.

For most religious diets the information above will already be helpful. Keep in mind that kosher and halal food may be very hard, if not impossible to get, forcing you to either compromise for the time of your trip or to make a detailed vocabulary list of all the things not covered that you’d like to avoid. Muslims and Jews won’t be able to eat most ramen, tonkatsu (とんかつ) cutlets and gyōza dumplings, as they contain pork, but they can try chicken, beef or fish dishes (however, those which follow halal or kosher may be hard to find easily) – while non-vegetarian Hindus should stay away from gyūdons (牛丼) and sukiyaki, and instead go for chicken, pork or seafood options. Jewish who also avoid shellfish need to look out for crab, kani (かに/カニ), prawns, ebi (えび/エビ/海老), and oysters, kaki (かき/カキ/牡蠣), in particular, as they feature a lot in Japanese cuisine. As you already saw, turning pescatarian or vegetarian while in Japan is also entirely possible. Regardless of what approach you take, you’ll never be short of fantastic dishes to try!

Japanese Language for Asking and Explaining Your Diet

The simplest way to ask if a dish contains a certain ingredient is this: Kono ryōri wa X ga haitte imasuka?, where X stands for any ingredient. Unless your query is complicated, this should be enough to get a clear answer. You can also ask for recommendations if you’re unsure what to order, by asking: X-nashi no ryōri ga arimasuka?, which means „Do you have any dishes without X?”. However, if you ever have to explain to someone your dietary requirements, it is best to say X wa taberaremasen, which means that you are unable to eat X or cannot eat X. For many Japanese it may be odd to not eat fish or chicken or eggs out of personal choice, so this is a simpler way of ensuring that you follow your diet and that the other person will understand. And don’t worry – it’s entirely possible, especially for vegetarians and vegans, that when you say that you cannot eat something, your host/waiter/the innkeeper will bring you a slightly bigger bowl of rice or a bigger portion of vegetables, to make sure that you are not hungry. That’s Japanese hospitality at its best.

Of course, as you know best what you can and can’t eat, make a vocabulary list to keep handy during your trip. Do not assume that if you ask whether a dish contains meat or milk, you will be told about everything – respect that special dietary requirements aren’t as common in Japan as in the West. So if you are worried that you might unknowingly eat a bit of cheese or ham, note those words in Japanese and look out for them when choosing your meals.

Before entering a restaurant, look at their display as well. Many Japanese restaurants display wax models of the food they serve, which allows you to see what it looks like, but also to check if it contains something you can’t eat. Or to find something that looks perfect for you that you wouldn’t think of ordering yourself.

display in front of Japanese restaurant

Finally, remember that you are going to Japan – people will want to help and accommodate to your wishes as much as possible. Regardless of your diet you can go to most restaurants and find something for yourself, or ask about their menus. While a lot of places, especially in big cities, may have English menus, the staff will be happy to help if they don’t. Politeness, some patient explanations and a little willingness to compromise when it’s reasonable can go a long way, and you will certainly not travel around with an empty stomach.

If you’re celiac or you’re trying to cut your gluten intake, check this article for 10 gluten-fre...

10 Places Focused on Vegetarian and Vegan Dishes in Shibuya for Everyone!

Shibuya has many restaurants and cafes that offer delicious vegan dishes for everyone. Check out ...

Vegetarian and Vegan dishes are an amazing treat for those who are very health conscious. Visit t...

History of Japanese Curry and Guide to Curry Based Japanese Dishes

Today curry is a very popular dish in Japan, and it can be found in many different recipes. Let’s...

10 Places Focused on Vegetarian and Vegan Dishes in Shibuya for Everyone!

Shibuya has many restaurants and cafes that offer delicious vegan dishes for everyone. Check out ...

In Japan, you can enjoy food from all over the world. We, Japanese enjoy various kinds of food. ...

Basics of Japanese Ramen, Its History and Types

This article is explaining basics of Japanese ramen such as history, ingredients, and types of ra...

Have you ever been to supermarket in Japan? It is a paradise of snacks and candies. I have heard ...