Hanami, cherry blossom viewing, is a very important part in Japanese culture. I, as a Japanese, participate in Hanami at least once in a year, like most Japanese people do. I will introduce how local Japanese enjoy Hanami.

The history of Hanami

The history of Hanami, cherry blossom viewing dates back to Heian Period which is around 10-11th Century. At that time, Hanami was enjoyed only by noble classes. The time passed, and in Edo Period, Hanami became to be widely enjoyed by common people, too. Lots of cherry blossom trees were planted in multiple places, and some places are major cherry blossom viewing spots today.

There are various ways to enjoy Hanami, but I guess the most common way to enjoy it is to do picnic under cherry blossom trees. People enjoy picnics with their families, friends, and co-workers. Many people participate in multiple picnic events with different groups on separate days.

We go to parks where cherry blossom flowers bloom and where people can bring picnic sheets to sit together. In popular parks, it becomes very hard to find a space, so it is a common duty for the first year worker to go to parks early (sometimes from morning) to reserve space for their group! 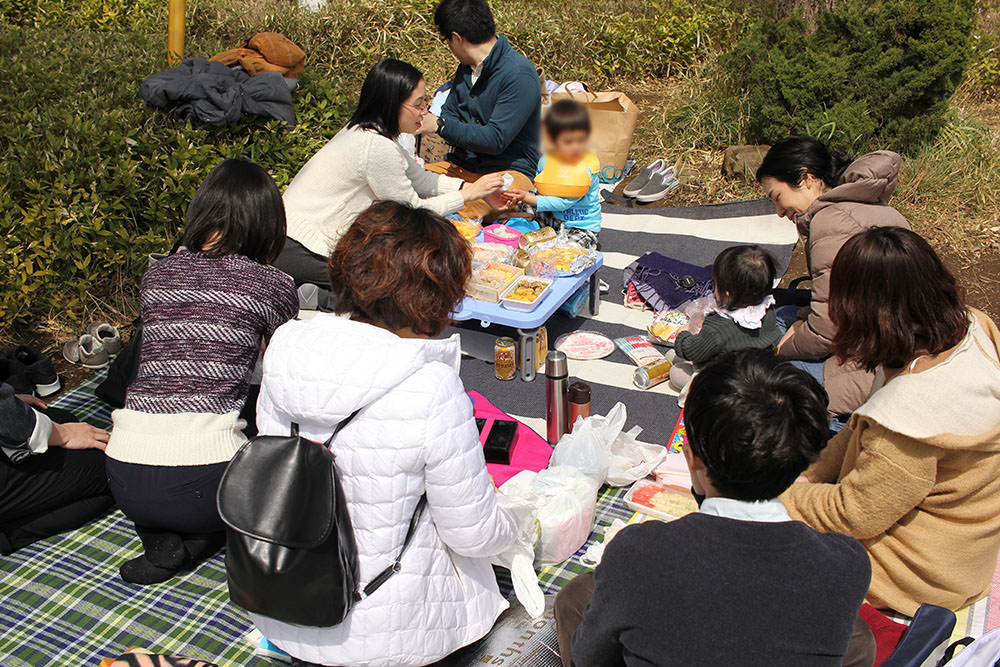 Place picnic sheets to sit on 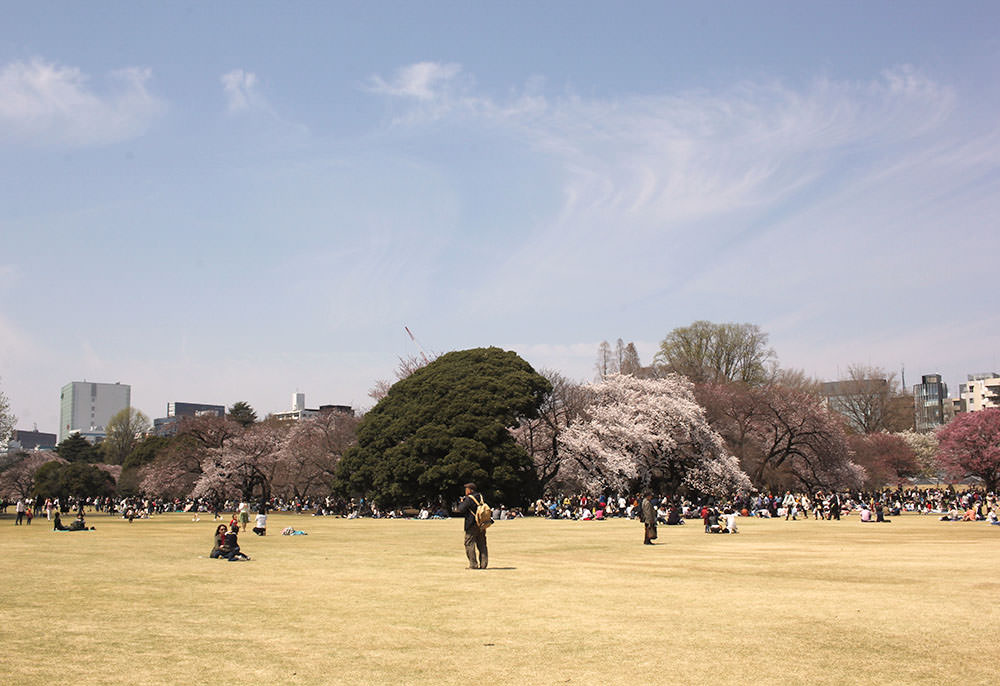 Some of the most popular places for picnics are Ueno Park, Shinjuku Gyoen National Park, and Yoyogi Park. 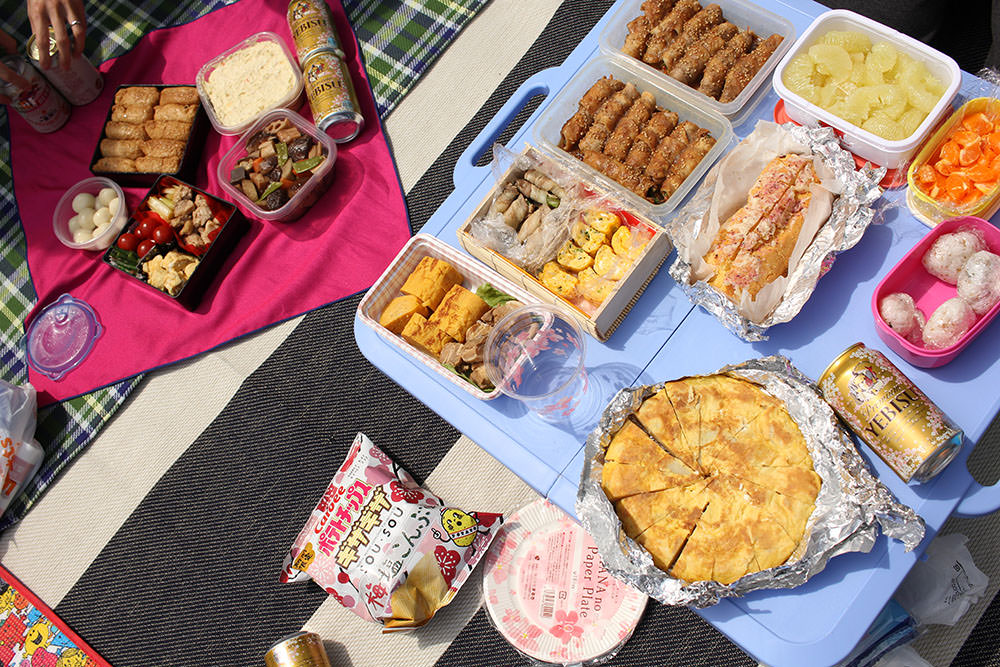 We bring food and drinks to enjoy with their group

Alcoholic beverages such as beer and Japanese sake are essential to Hanami. There is a term in Japanese “Hanami-Sake” which depicts the drinking occasion with cherry blossom viewing. 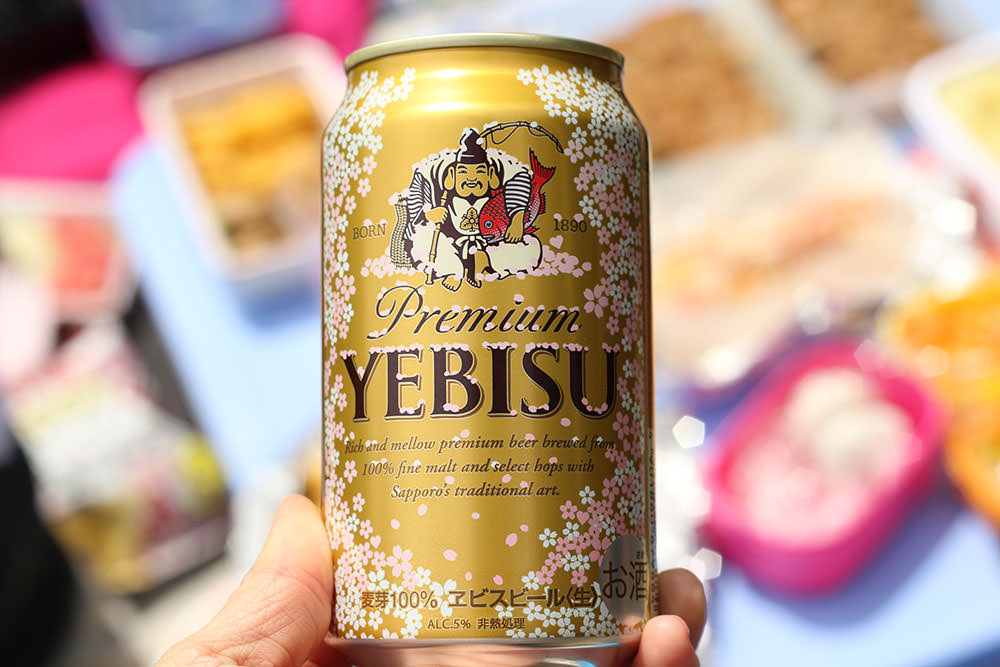 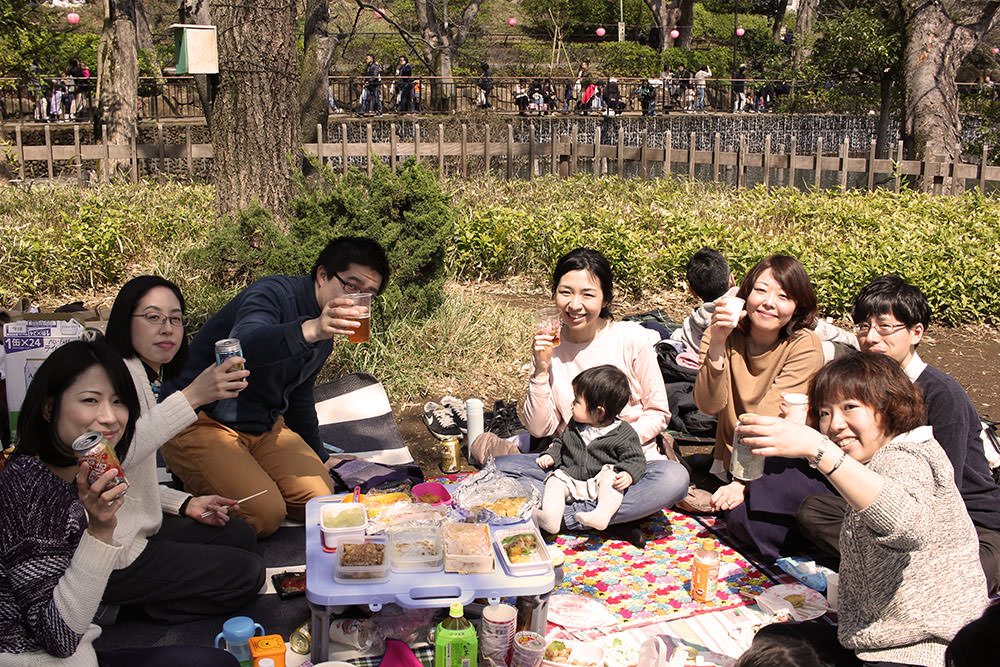 A typical Hanami with friends, in many cases children come with parents to Hanami since they are babies.

It depends on parks, but sometimes there are food strolls out. People can enjoy street food such as takoyaki, okonomiyaki, and yakisoba. 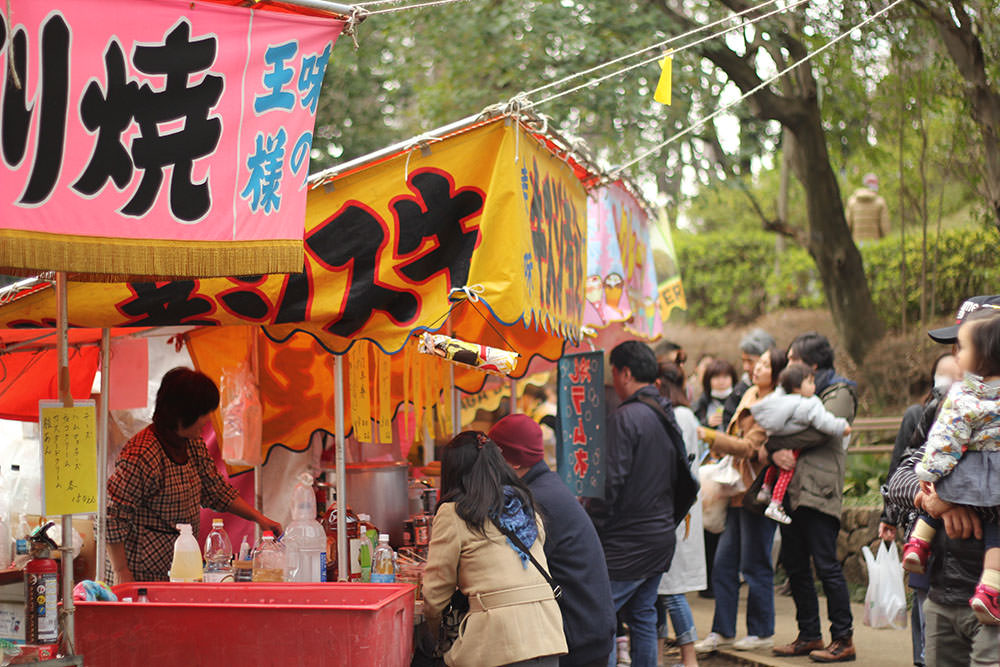 Food strolls at a park where people can enjoy Hanami

5 other ways to enjoy Hanami

Below are how locals enjoy Hanami other than picnics.

There are many famous Hanami places where people can not do picnics. Such as Chidorigafuchi, Zojoji Temple, and Meguro River. At these places, it is more common to enjoy flowers as they walk. Food strolls are out at some places, and you can enjoy some street foods, but people basically do not sit down. 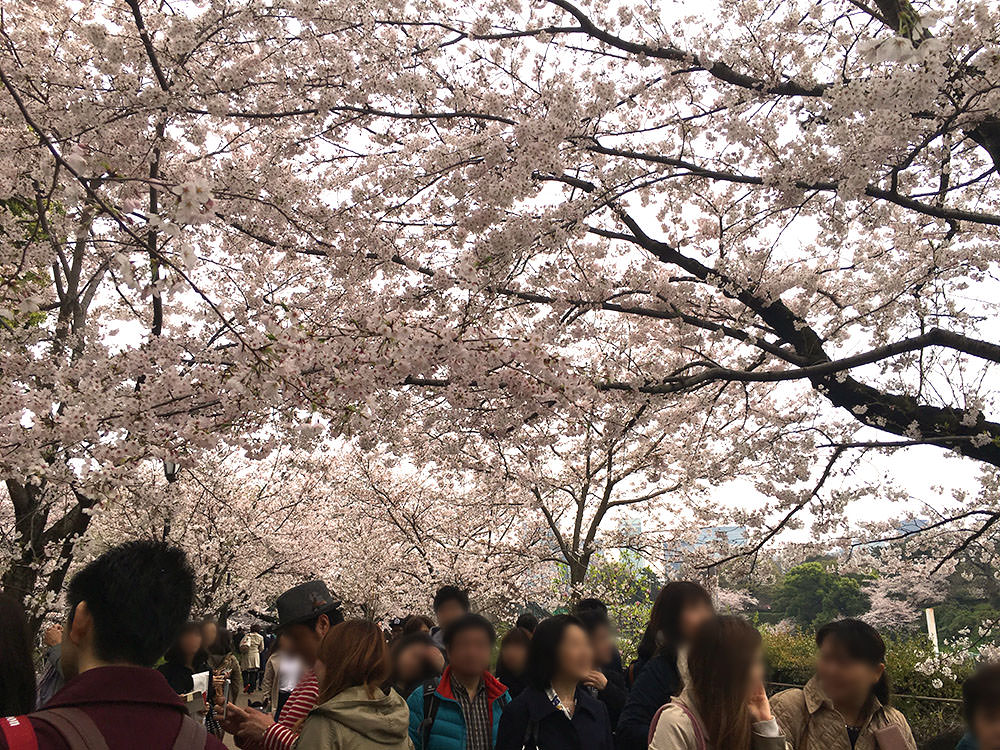 Sakura around Chidorigafuchi. You can walk under the sakura tunnel

“Yozakura”, meaning “night sakura” is also a common thing to do for Japanese, especially those who have work during the day. After work, people go out to see cherry blossom flowers lighten up. Examples of those places are Tokyo Midtown in Roppongi, Rikugien Gardens, and Sumida Park.

People sometimes get on a boat to enjoy cherry blossom flowers from the river! There are traditional Yakatabune Hanami boat cruise and also Sumida River boat cruise.

4. Hanami at a restaurant

In Japanese, there is a term “Hana Yori Dango” which means “dango (food) more than flowers”. This term tells us that eating is very important part in Hanami experience. 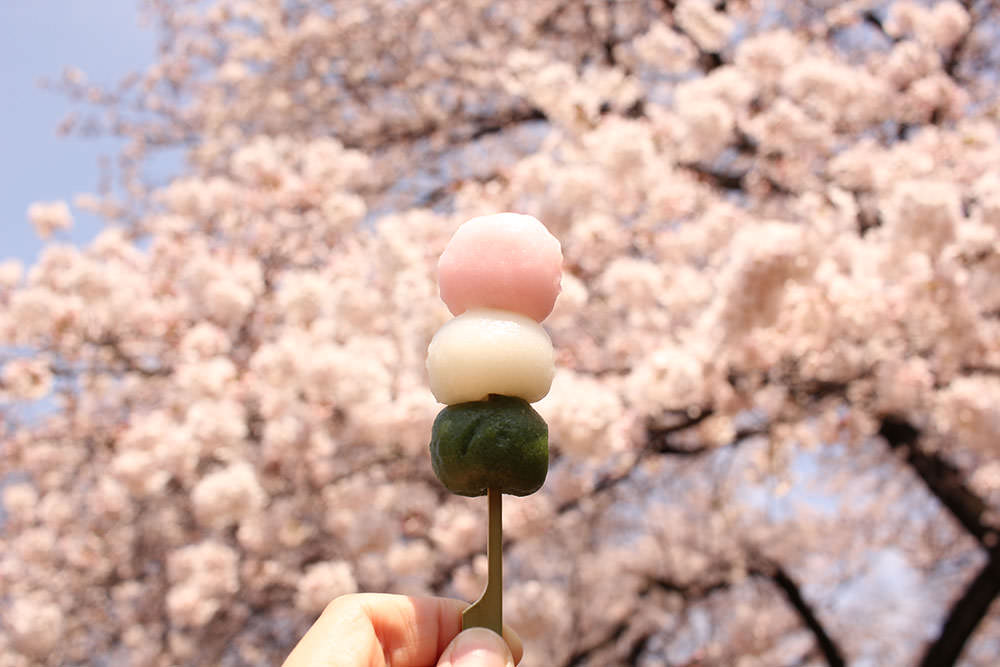 Related: How Sakura Flavor Can Inspire Your Japan Experience

How Sakura Flavor Can Inspire Your Japan Experience

Japan is not only famous for all-year-round sushi or premium seasonal fruits, but also for every ...

The Sakura Blossom and its Cultural Significance in Japan

Of the many symbols one can think of when hearing Japan, the Cherry Blossom is definitely one of...

Most of Japanese go out for cherry blossom viewing in spring. Here are top 3 places in Tokyo: Rik...

What are the best ways to experience and be involved in Japanese culture?

2k540 AKI-OKA ARTISAN is the best place to find Japanese crafts for your souvenir in Akihabara, T...

10 Halal and Muslim Friendly Restaurants in The Shinjuku Area

10 Yakitori Restaurants in Ueno for a Juicy Bite!

20 Best Things to Do in Akihabara That Never Make You Bored!