The foliage in Kamakura usually changes in mid-November to early December. Autumn has always been a special season in Japan because this is the time when the leaves of the trees change their colors. They paint Kamakura in beautiful stripes of yellow and red that attracts tourists from all over the country.

Kamakura is also known for its hiking trails, and many agree that autumn is a great season to enjoy the beauty that nature brings. It’s like going inside a hidden wonderland, where you can lose yourself in its colors. Give yourself a well-deserved vacation and take a stroll among the 10 best places to view autumn leaves in Kamakura.

The Meigetsuin Temple was founded in 1160 and is nicknamed the “Hydrangea Temple”. As the name suggests, the temple has an abundance of hydrangea flowers in its surrounding land. but some people appreciate viewing the scenery in autumn, when the foliage changes its colors. The view from the iconic circular window is amazing. When the hydrangeas are in full bloom in June, the temple is covered in hues of blue. It is an interesting spectacle for those who appreciate flowers. These flowers are of the Hime Ajisai variety which literally translates to “Princess Hydrangea”. Some people appreciate viewing the scenery within the temple, especially during autumn when the foliage changes its colors.

Engakuji Temple is one of the five great Zen Temples in Japan. Founded in the year 1282 by Hojo Tokimune, its main purpose was to pay respects to the brave soldiers that had fallen in battle during the Mongol Invasion. Tourists flock to Engakuji at around early December to appreciate the autumn colors. The striking colors of the surrounding maple trees is indeed a great sight to behold.

Zuisenji Temple was founded by Muso Kokushi, one of the leading Zen Masters and a famous garden designer during his era. This temple that is tucked away on the eastern side of Kamakura is surrounded by nature. With Muso Kokushi’s skill, he transformed this Zen temple into a masterpiece which lasted through the ages. During spring, the plum blossoms are in full bloom. In summer, the narcissus shows their colors, and in autumn, the maple trees take center stage. Zuisenji Temple truly is one of the most beautiful temples in Kamakura.

Hasedera Temple is well known for the famous statue of Kannon (Goddess of Mercy). The statue is also one of the largest wooden statues in Japan with a height of 9.18 meters. One of the temple’s attractions is the Kannon Museum in which some of the treasures of the temple are displayed to the public. However, during autumn the temple garden is a sight to behold. The garden has a pond and is surrounded by trees that show a pretty sight during mid-November up to early December. Another interesting part of the Hasedera Temple is the cute statues of different sizes that litter the temple grounds. These statues along with the changing of the seasons create striking contrasts that brings delight to those who visit Hasedera Temple. They do special lightings from end the of November to early December. This is to help people enjoy the color of autumn leaves at night.

Shishimai Valley is located along Tenen Hiking Course, a very popular hiking trail in Kamakura, especially during autumn. The valley which is covered by maple trees changes the scenery to a painting of yellow and red when their leaves welcome the changing of the season. Under your feet, the path is littered with a tinge of gold as the leaves of the ginkgo trees turn this into a wonderland of nature. A great place to take a hike and be at peace with nature.

The Kamakuragu Shrine is a beautiful place to relax and enjoy a reprieve from the hustle and bustle of the city life. The temple grounds are quiet and help to put your mind at ease. The temple was founded by Emperor Meiji in 1869 to honor the spirit of Prince Morinaga. Although many may consider this temple to be fairly new, many tourists visit the temple during spring and autumn to enjoy colors of the season.

Tokeji Temple was founded by the widow of Hojo Tokimune in 1285. This temple has a unique history on which abused women or those who wanted to have a divorce, seek refuge upon the temple. This is also the reason why the Tokeji Temple is coined as the “Divorce Temple”. Today, men are no longer barred from entering its doors, and the temple became a thriving tourist attraction. The beautiful trees that surround the temple give it a colorful hue at the passing of each season. Autumn is also a good time to visit Tokeji Temple so make sure to add it to your list!

Kenchoji Temple is the oldest and the number one among the five great Zen temples of Kamakura. It was founded by Emperor Go-Fukakusa in 1253 and consists of many temple buildings and sub-temples. The garden behind the Hojo (the previous dwelling place of the head priest) is designed by the famous garden designer Muso Kokushi. The view from the observation deck of the Kenchoji Temple gives you a scenic view of the surrounding landscape which is more attractive during autumn.

Hokokuji Temple was the family temple of the Ashigaka Clan during the height of their power. The temple is well-known for the bamboo grove that paves the narrow path towards a tea house, where guests are served a cup of tea and sweets for a reasonable price. The contrast between green bamboo and the colors of of the leaves (red, yellow and orange) is beautiful in autumn. Drinking tea while appreciating the bamboo grove is one of the highlights of visiting Hokokuji Temple. 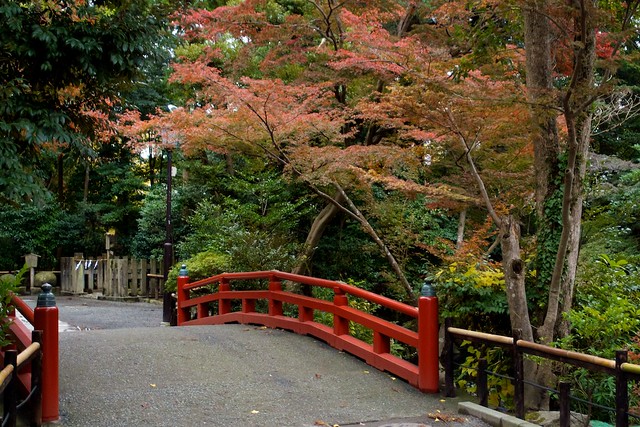 The Tsurugaoka Hachimangu shrine is considered as the most important shrine in Kamakura. Founded in 1063 by Minamoto Yoritomo but later moved to its current location in 1180. The shrine is dedicated to the deity Hachiman. The shrine is always crowded during special events that happen on a yearly basis. Just a 10-minute walk from the Kamakura Station, the shrine is a great place to visit during autumn. During the end of November or early December, the leaves of the trees that surround the temple grounds give it a cluster of yellow and red which is a yearly attraction in Kamakura.

10 Places to see Autumn leaves in Tokyo for Beautiful Scenery!

Tokyo has many scenic places to visit during the autumn season. Check out these 10 places to see ...

Hatsuhinode is an essential part of Japanese culture. It’s the Japanese term to welcome the first...

10 Best Shrine and Temple in Kamakura that Will Amaze You

Kamakura is a beautiful city near the sea that is found in the southern part of Tokyo. Embark on ...

Kamakura is a beautiful coastal town located less than an hour away in the southern part of Tokyo...

Make the most out of your trip to Kamakura by scheduling it in time for any one of its major fest...

From ancient temples to modern aquariums, enjoy a mix the of old and the new in Kamakura – Japan’...